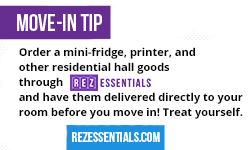 8.0 minute walk to The Rock

“I like that's it's a smaller dorm so you know everyone, and it feels more like a home. I like that the rooms are really big and it's usually quiet, so you can get enough sleep but also can go out when you want. I like that it's South Campus so I'm closer to downtown Evanston. It's not as social as I wish it was, but it's easy to make a good group of friends in the dorm and then it's fun. I also like that it’s in the sorority quad, because it’s beautiful. Also important to note: There’s only two washing machines, and they’re almost always full.”

“I’ve loved living in RoHo for many reasons. It is very quiet and homey, so I can go out every day and do whatever I want and know I get to come home to some peace and quiet. People say it is unsocial, but I would disagree. As an extrovert, those of us who want to make an effort to be social have become very close friends. We also have awesome munchies, activities or free things to do outside of the house quite often. The room sizes are amazing and the bathrooms are very clean. The only downside I would really mention is the lack of washing machines and dryers… two of each is definitely not enough. However, we have a great lounge area with a television and tables and a ping-pong table. The location [of the dorm] in the middle of the sorority quad is great for being in a sorority or having classes down south, but not conducive to partying north all the time. It’s also really annoying to have to tell people what Rogers is because no one knows.”

“I'd say that I like RoHo because the facilities are very nice and the rooms are very big and it feels homey because it is so small. I love every part about it as a sophomore, but I lived here last year as a freshman and the one downside was that I did not immediately make as many friends simply because the dorm is so small. ”

“Rogers House is a chill but still very social environment. It's honestly a hidden gem at Northwestern. As a freshman, it probably isn't as big or as social as most people would want. But it is still an amazing environment and the people are great. Also the rooms are probably the biggest on campus with amazing amenities. I have nothing but good things to say about RoHo. ”

8.0 minute walk to the Rock