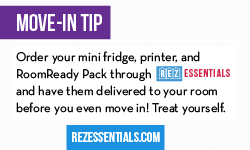 1.0 minute walk to The Rock

“I love it. The amenities are everything you need; most importantly, the suite system makes it really feel like home and creates a great sense of community. If you don't know everyone in your wing and aren't familiar with most people in the dorm, that's impressive. It's close to two dining halls and landmarks like the Rock!”

“It's a good location for Medill kids, right next to McTrib. Everyone's nice, and you can choose how involved you are in actual dorm activities. The rooms are pretty small, and you'll have space problems if you don't want to bunk your beds. The social areas are nice though, I like the mini lounges in each suite. It’s a quiet dorm, which is nice if you want to be able to do homework. ”

“ISRC is a vibrant community filled with some pretty cool ‘cats and delicious food. Because ISRC is so small, it’s been easy for me to make friends and I think people here generally care about one another. We have a pineapple as a mascot – how cool is that?”

“ISRC is generally a quiet dorm, but if you go looking there will surely be people hanging around in a suite somewhere who will chat with you. I also especially like the suites because they bring people out of their rooms. The rooms are rather small, but that is just more reason to use the suites. The location is ideal for South Campus classes because it’s inside of Sheridan Road; however, that means its also farther away from dining halls and requires you to cross the street. ”

“It’s a good location if you have a south campus major, but it is not a very nice building itself. The rooms are very small, everything’s a little dated, and compared to a place like Allison it feels very bleak. It feels like a lot of people end up here after having bad priority numbers and just try to make the best of it. ”

“It’s a great community, everyone’s really welcoming and open to new cultures, and there’s always something interesting going on. There are a lot of cool facilities, like the workout room and the practice room, and a lot of them cater to different interests. ”

“ISRC has small-ass rooms and small-ass closets, but I love the lounges. I also love how everyone here is so close and can just talk to each other. It’s a small community, in every sense of the word. ”

“I think of it as the dorm that nobody really wants to be in.  I don’t know many people that live there, because many of those that do aren’t social butterflies.  But the people I do know that live there don’t have anything good to say about the dorm and it essentially just becomes a place to live.  The most common response when someone tells you they live in ISRC is ‘sorry.’”

“It's not the best place to live freshman year if you're trying to join Greek life or meet a bunch of people. If a small, tight-knit community is what you’re looking for, ISRC is the place for you. People either love it or hate it. For me it was pretty oppressive in terms of meeting more people, which is why I moved out, but those who enjoy it make life-long friendships and usually join the executive board of the next year. P.S. Munchies (free Wednesday night food) are always on point.”

1.0 minute walk to the Rock